Angel Alamo: What guitarists did you admire growing up?

Yiannis Papadopoulos: Slash from Guns and Roses. I love every line, every solo just a great guitar player. Combining the licks and the melody there. When I was 18 or 19 I started listening to John Petrucci (Dream Theater). He is my biggest influence as far as a shredding guitar player. My other favorite would be Richie Sambora (Bon Jovi),I love Bon Jovi, I love his work. He is one of my three biggest influences. My biggest would be John Petrucci.

AA: Are guitar solos important in songs or has it become a thing of the past?

YP: I don’t know if I would say it is a thing of the past. It is definitely not as important as it used to be. Music has evolved throughout the centuries even back in the days of Niccolo Paganini. Before Paganini it was not considered the most important thing to have a very good violinist in an orchestra. When he came out things changed. Then you have the shredding days with Yngwie Malmsteen, Paul Gilbert, and all of these guys Nuno Bettencourt. It’s not the best period for the shredding music; compared to ten years, 20 years ago the need for big heavy solos has declined. I still feel like there is support for this kind of music. For example you have Zakk Wylde out doing great.  Yngwie Malmsteen  doing a great job on the soloing aspect of music. I believe most people prefer listening to songs no matter if they have shredding or solos. There is an individual focus on the songs and not the solos.

AA: What is the worst part about being on the road?

AA: Which do you prefer being in the studio or being on the road performing?

YP: I love both. In the studio you have the freedom to create. To put your soul inside of the song that you write that you compose. You have the freedom of time to think about it to write something good. On the other hand, when you play live you have this feeling connected to the audience which is so valuable and so precious. If I had to choose at this point in my life I would say I prefer playing live rather being in the studio. It changes depending on time and what is happening.

AA: How did you get the gig with Scott Stapp?

YP: That’s a very nice story actually. You wouldn’t believe it but I sent a message to him. Back in the days I felt like all of these cool people go out and play and I want to be like them. One day I decided to send a message to Scott on his Facebook page saying I am a fan. I sent him several things I have done, I won these competitions, I have worked with these guys, these are my social media links a bunch of links you can check out. I completed my message saying if you ever need a guitar player just let me know I am available. I am a big fan, I would love to work with you and go out on the road. The next day I had a reply saying I like what I see, I am just about to hit the road again I would like for you to be my guitar player. Let’s be in touch when the time was right we did the final details and here I am now. I have been with Scott (Stapp) since December, 2015 It’s going great, I am very happy. I am feeling blessed to be here and work with this guy he is one of my idols. I love his voice and admire his lyrics and career. He is just a sweetheart, he is such a good guy. I am very happy.

AA: What are your favorite songs to perform live?

YP: One of my personal favorites is definitely Torn, I love that song from the first moment that I heard it. On the other spectrum I really love overcome. I love the atmosphere of Torn but I really like the energy of overcome. Those are my  two favorites.

AA: How often do you practice?

AA: What are your favorite guitar solos?

YP: That’s a tough one I have so many. I would say first solo I heard and felt like this is what I have to do with my life is (Guns N Roses) November Rain. I love all of it. When I heard that song I felt I want to be like this guy even with the video clip he was so cool with his guitar outside of the church that was so great. Apart from that so many others Dream Theater songs Scarred is one of my favorite Petrucci solos ; Spirit Carries on is one of my favorites the list goes on and on I really can’t decide. Those are my favorites.

AA: One city you would love to perform that you haven’t been to yet?

YP: That’s a very nice question. I really want to go to Tokyo. I haven’t played there it would be a dream come true if I ever got the to play there. The other one was New York. I have accomplished New York so far.

AA: How was it playing in New York (Fox Business Center rooftop)?

YP: New York is possibly my favorite city so far. Playing there was a dream come true. It was a dream also the atmosphere because it was early in the morning. The sun was hitting the skyscrapers and the windows we were on top of the fox business center it was such an amazing atmosphere people going on their walks in the morning. All of these cars. It was an amazing feeling. It was a great experience.

AA: Any timeline on when you will release solo material

YP: That is one of the funny ones because I keep saying to the people my solo album is going to come out soon and soon. I think it’s going to be out near the end of 2017 early 2018. I have the material already but I just keep postponing it. Every year something even better is happening like right now I am with Scott Stapp. I am being introduced to the US market. The best thing to do is wait until the people here in the United States get to know me and my playing here. I would wait for Scott Stapp to put out his work first and then I put out mines would follow pretty soon. That would be the timeline.

AA: If you could play or jam with any guitarist who would it be?

YP:  One guitar player that I have listened to throughout the years, I still listen to him and I admire his work is Bret Garsed. I really admire his personal work his solo album I like Big Sky(2002) and Dark Matters (2011). This guy is so brilliant he combines melody I to clique in an aspect that I feel like he speaks to my soul. I like Buckethead.  He is very intimate in his playing it is very unique.

AA: What advice would you give to any young guitarist?

YP: If you are going to go, go hard. Never stop believing in yourself never stop practicing. Dream what you want to be .Be sure you have a clear vision of where do you see yourself in the future. No matter what always remember the only limitation is our imagination. That is my motto. I strongly believe in that sentence. 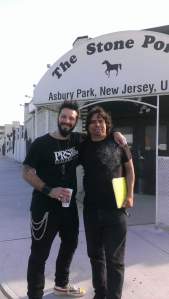 I am a journalist at BallBuster Music, Co-Host of The Metal Summit, Producer/Host of On the Road with Angel Alamo, The Movers & Shakers, and Da Sports Update. View all posts by Angel Alamo