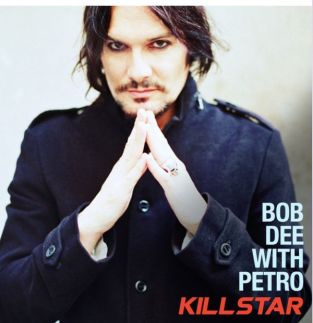 On a rare nice Saturday afternoon, I got the chance to meet and talk to Bob Dee with Petro in Jersey City NJ. Not far away from New York City where Bob had been working hard on his new album. It was a rare opportunity to have an in-depth conversation about music, his new album, and what it’s like touring around the world. An experience that many of us would see as a dream job. This year is expected to be a busy year with the release of the new album and a world tour to follow.

Angel Alamo: Where did you grow up?

Bob Dee: Hi Angel, thank you for taking the time to interview me.

I grew up in Utica, NY then moved to Ithaca/Cortland, NY to play with a band called “Tokyo”. I was blessed to have been schooled by some of the legends of rock. The late Gary Driscoll (Rainbow, Elf) he called me cool breeze showed me the ropes of touring along with Craig Gruber RIP (Black Sabbath, Rainbow, Gary Moore)  Duck MacDonald (Blue Cheer),Joey DeMaio (Manowar) and Dawk (RIP) he made my guitars and hot rodded my amps.. he was the guy who hotrodded all of Richie Blackmore’s amps and guitars I even bought two of Richie’s Marshall bottoms… I learned everything from them about touring and songwriting… I then moved to New York City and within a short time.

AA: What musicians influenced you growing up?

BD: I was into the rock bands like Kiss, Deep Purple and Mott, The Hoople, and of course Jimmy Page. My favorite guitar player is Gary Moore. I even won the Guitar World Gary Moore contest a few years ago. I have always been a Gibson Les Paul guitar through a Marshall amp player, after seeing them play. I just saw Ace Frehley play in New York City. I was like a schoolboy so excited. I have a large giant “Kiss” poster up in my apt from when they played ‘Madison Square Garden” here in NYC

AA: What are your favorite albums?

BD:  As for older albums I have been listening to “Mott The Hoople” and the early “Queen” album called Sheer Heart Attack as for new albums I have been into this band called “HIM” from Finland I have all their albums and saw them recently on their final tour sadly they broke up.

AA: How is recording the new album coming along?

BD: It’s been a journey so far. We had so much success with the last album with “Socially Awkward” as the single … I knew I had to come up with a new anthem for the world… we demoed I think 22 songs all though the holidays it was gut wrenching but on the final weekend of recording I wrote the single. The album is out now

AA: Any new details about the new album?

BD: Well Angel you have the scoop. The title of the new album is called “Killstar”

Yes the album is being mastered by Alex Saltz he just mastered the new Stryper album there will be 11 songs with the new single called “Fight”.

AA: How is making this record different from previous album?

BD: The last album, I wrote most of the songs in a room in Queens. I stayed in that room and just kept demoing songs. The songs just flew out of me so easy this album we demoed something like 22 songs … all through the holidays freezing cold and snow and finally on the last weekend of recording. I came up with the single “Fight” an anthem for the working class man so stoked the song rocks!!

AA: Is it best writing songs at home or on the road?

BD: I love writing on the road something about the tour bus the motion I always carry my iPhone and Evernote app to write and sing all my ideas into it. I have a Pro-tools set-up at home but I always go to Brian Bauers studio in Union, New Jersey to record… Brian has been with me since the beginning my first album “Bullets & Bandaids” we then go to Flux studios in New York City so Scott Campbell (drums) can record his drum tracks

AA: What musician would you like to go out on tour with?

BD: We toured the UK last summer and we were support for “Chris Holmes” former ‘Wasp” guitarist wow we had a blast he really loved us because I was from New York City so he let my guitar player Ade Fisher use part of his amp set-up

AA: How did you get signed?

BD: This is a cool story. I was married living on the Upper Westside NY. in a one bedroom doorman building overlooking the city. a beautiful life, one day two years ago she broke up with me and told me she wanted a divorce. while we were going to Santorini Greece for our vacation. She told me I was a loser and said I would never get another record contract, so we got a divorce and I moved out devastated to Queens, NY with 4 boxes and 11 guitars and two Marshall amps. All I had was a room. I was so broken but I channeled all my pain and I wrote all the singles in one week Socially Awkward etc. I sent the songs over to Mark Berry and he signed me on the single to AMG/Universal records. We then went on to release the full album through AMG/SONY records and signed multiple licensing deals and toured the UK.

AA: How are audiences different in other parts of the world than in America?

BD: I think the highlight for me …when we played in Japan wow talk about love the fans are pretty amazing. I had one fan make me a comic book with my image that I still sell on my website. I also loved our show this past summer when we played in London we got bumped to 1am in the morning so we went out and walked around Soho and just kept drinking and eating when we got back to the club the place was packed the band Ade Fisher, Norm Appleby and Paul AT Kinson were on fire the crowd was rushing the stage and they were just pumped up!!! loved every minute of it.

I can say as for the US.. we played SXSW in Austin Texas and the crowds were amazing .. I had an awesome show in Rochester NY recently ….wow love Rochester they know how to rock!!!

AA: What do you make of the Gene Simmons’s statement that rock is dead?

BD: I heard he said that … hmm we have been lucky I have sold more CD’s and Merch in the last two years than my whole career and the fans and the shows have been amazing around the world.. I don’t believe it!! Gene will be Gene.. I am an Ace fan!!

AA: What is the toughest cover song to play and why?

BD: Its funny you should ask that question. We just recorded a cover of the ‘Rolling Stones” classic “Wild Horses’ it was not as easy as I thought. I didn’t want to record it the traditional way with acoustic guitar real pretty so I got in the studio with My Gibson Les Paul guitar and my Voodoo Amps and just cranked out power chords and I had Scott Campbell drums just record a groove… I just sang over the top of it  almost ethereal sounding vocals we then had a cello player come in and play a counter rhythm It sounds huge so far.. I hope our fans will enjoy it!!

AA: How is it determined how much time do you play?

BD: It is always up to the promoter. I will give you an example. When we played in London we got bumped up to 1 in the afternoon we were all pissed off. The place was packed. This is not bad for a guy from New York but the crowd was rushing the stage anit was a heatwave and we played an hour.

AA: Which do you prefer to play festivals or just playing on your own?

BD: I like festivals it is amazing you get put in with these bands I love it. It’s so many people to play for.

AA: What was some of the best band you opened up for?

BD: We did support for Chris Holmes he took us backstage he was nice he took pictures that was the highlight he was super nice. I have different bands I have a band here in the US I have one in the UK and one in Japan.

BD: Japanese fans don’t go as crazy but they are very respectful everything is done to a tee.

I still remember flying to Maui and then Japan I believe I went from New York to LAX then to Maui and we did Tokyo and Osaka coming back and they would not let me with my guitar. I had to basically sit down while they went through the stuff that I bought. They finally checked my guitar I almost got arrested going through the airport but I did it with no problems.

AA: How is Domino’s Pizza?

BD: Domino’s is a little different McDonald’s they have more fish sandwich and someone that’s all they do it over there.

We are working on a Japanese store with the promoter over in Japan. I want to go everywhere.

AA: How is traveling on the road?

BD: You travel in a van for 5 hours you get fatigued never eat good food. In Germany they’re really big on beer I remember going to the airport and Frank port and the employees are wanted me to sign autographs and it was a big deal.

AA: How was the video shoot for the song black forest?

BD: Call time was call time was 530am. It was A2 hour train ride on the way back from 10 to midnight and then fly back. It was 2 hours of plan looking good and lip-syncing you’re still thinking you’ll get that in your veins.

AA: What will be the first single?

BD: Fight song we are shooting the video in Orlando