Watch Koldblooded perform and you won’t believe how young these guys are or how professional and committed they are to the band and to each other if you spend time with them. You would have to see the band live on stage to know what I mean. In an era of singing shows. It is refreshing to see bands who work on their music and bust their butts on any stage and any chance that they get. I have seen the band perform two shows (Stone Pony and Brighton Bar Long Branch, NJ). The band gets better with every show and every song. I was able to catch up with Koldblooded after a great show at Brighton Bar in Long Branch, NJ.

Angel Alamo: You guys played a great show tonight how do you guys feel?

Kold Blooded: I feel great. I feel like it is the best show that we have ever played.

Angel Alamo: How did you guys come up with the name Kold Blooded?

Kold Blooded: We are big fans of the band Damageplan the Vinnie Paul and “Dimebag” Darrell side project, we were thinking of ideas one day and we thought what about Kold blooded instead of a c we were thinking with a K like the band Korn.

Angel Alamo: What where your musical influences growing up?

Kold Blooded: Everything from AC/DC to deftones, slipknot mudvayne, drowning pool, papa roach. My dad got me into Rush, YES, and king crimson. We also like rap. We like a whole variety of music.

Angel Alamo: What songs do you like to play in your setlist?

Kold Blooded: I would say bodies and break stuff we have done inn the last 3 or 4 shows. We like down with the sickness.

Angel Alamo: How long has the band been together for?

Kold Blooded:I started the band October 23, 2014 he joined a month later, bass player joined last year for a month then he left so we replaced him with a couple bass players it didn’t work, the timing came back together then he decided to rejoin and we have never looked back.

Angel Alamo: are you working on your debut album

Kold Blooded: We are working on an EP right now we got five songs demos that are done we are going to record them in the studio within the next month it should be out by late April.

Angel Alamo: Do you have any titles for the EP?

Kold Blooded: We are going to call it at this moment, which is about our lives whats going on.

Angel Alamo: With the music industry the way that it is normal for you guys to want to do an EP instead of a record?

Kold Blooded: With school its hard to find time to do an album. I feel like give it another year it may worth it. Getting together is tough. We are from different places. when we get together we do really well we take advantage of it.

Angel Alamo: For the fans that are interested are you going to put it on itunes or amazon?

Kold Blooded: We are looking at itunes, soundcloud, spodify and youtube our website. Hopefully get someone to distribute it somewhere.

Angel Alamo: The music business the way that it is now is it difficult to get signed knowing that a lot of record labels are not investing as much time and money in artists as before?

Kold Blooded:I think its hard to get product out because it seems a lot of bands sound the same nowadays we are trying to sound apart from that. We are not trying to fit in but be a band that should have come out in the late 90’s early 2000’s with groove and rapping and singing. We are big fans of metal, rap, hardcore rap metal,new metal, rap metal trying to bring it out together.

Kold Blooded:We have a show coming up Joe Flo’s Bar on May 28th. Thats the only show booked at the moment but we will have more shows coming up.

Angel Alamo: This would be the last question what does the future hold for the band is this something you want to pursue as a career?

Kold Blooded:My goal would be to get a following and put music out. I would love to not go to college and just go out on tour. I think i want to be a famous guitar player and do music but you always have to have a back up plan. It’s far away from now we have to focus right now on getting out music playing shows once the time comes we will know for sure what we really want to do. We want to keep building and building and hope that someone likes it. In the last week we have had an A&R rep from Atlantic Records and Roadrunner Records that said they were looking for unsigned band and to submit.

Angel Alamo: You played a great show at the stone pony but this show it seems you were pushing each other? Is it getting interest from Atlantic records is that pushing the band and telling the band that you guys are doing something right?

For more information on Koldblooded go to: 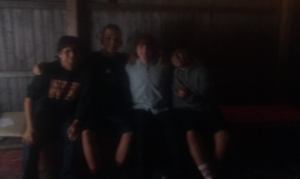