I got the chance to talk to Stryper frontman Michael Sweet a few hours before he was to hit the stage at the M3 festival for the start of the world tour to support the new album God Damn Devil.

Angel Alamo: How does it feel playing at the M3 festival this year?

Michael Sweet: Well we just got in very late last night, I went to bed and I arrived here on the scene just a few moments ago so it looks like it’s going to be awesome man some great bands good turnout is going to be exciting.

It’s a bit cooler today it was like 95 degrees’ yesterday right.

AA: Before a show how do you warm up your voice your voice still sounds amazing after all these years?

MS:  I smoke about four cigars and drink about a fifth of bourbon, I’m just joking (laughing). You know what man I don’t do what I should do most of the time. I try to warm up, drink some tea do some exercises and chill out and decompress. I do not always have the time to do that. But yeah I try hard to take care of myself so I think that helps.

AA: With the new album God Damn Evil How long does the band plan to be on the road for?

MS:  By the end of the year we will have done two tour runs about 6 to 7 weeks long each we will have done many fly dates were going to Japan, Australia, Spain, and quite a few other fly dates as well Puerto Rico I know so when are we going to a lot of places. We are working on hopefully some south American dates hopefully that comes together. A lot of touring between now and the end 2018 all in support of the new album (God Damn Devil) We are going to keep going, we have a lot in store for people in the next 10 or 15 years.

AA: After spending so many years together is it easier to get along as a band as the years go by?

MS: We figure out how to get along as a band after spending so many years together.  Like anything you’re dealing with four different personalities so you have to communicate you have to learn how to deal with things and handle things in a professional an adult manner I think over 34 years we figured out how to do that it gets tough sometimes you know like someone has to get on me about something I have to pick up after someone you know what I mean those little tiny things that really don’t matter what they do we go through that like any other band which is just like a marriage that just came out working to talk and communicate as much as you do that’s going to be great

AA: Will the band ever released a box set of unreleased music or album remastered with bonus tracks?

MS: I mean that is certainly a possibility we have never discussed that. I think we are at a point where we have enough music to do something like that we have quite a catalog and loud music so that’s something that we could do but it would have to make sense though it would have to be in demand and people would have to want it. For us to put it together and go through the effort of making that happen in today’s music world is questionable.

AA: How has technology changed to hate that you write music or has it changed?

MS: It’s change a little bit I’m able to put things together faster because of drum software and programs and iPads and guitars apps It makes it a little easier you can set up anywhere and write which is really cool. Obviously Pro tools has made life more difficult and easier. the easier side is that you can pretty much do anything you want with Pro Tools in terms of editing and what not and the difficult side is that you can pretty much do anything you want so with that comes more time and expense and effort and all that kind of stuff so in the old days there was something really cool about going in and recording on tape analog not spending two hours on a guitar solo like you can now with Pro Tools. You can do a 100 takes and piece them all together now a little bit of cheating with them and you can lose your spontaneity you can lose your energy and it becomes stale pretty fast.

AA: And my last question are there any places that you haven’t played yet?

MS: There are a few places we’ve never been to China or Russia and we’ve never been to Mexico we almost went to Mexico a few times but it didn’t work out but man we would love to go to all three places especially Mexico because it’s so close and we have such a large fan base there so it will be amazing to see that become a reality. 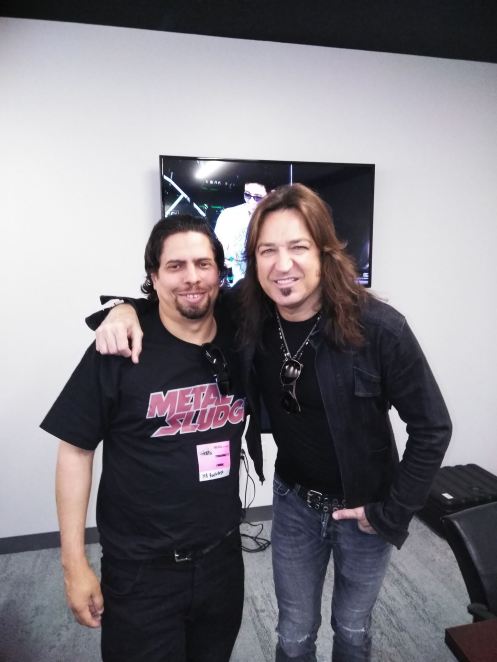